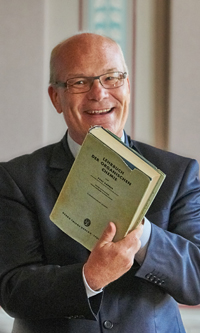 Herbert Waldmann studied chemistry and completed his PhD in organic chemistry in 1985 working with Horst Kunz. After a two-year postdoctoral fellowship with George Whitesides at Harvard University, Cambridge, MA, USA he pursued an academic career and qualified as Professor at the University of Mainz in 1991. Shortly thereafter he was appointed Professor of Organic Chemistry at the University of Bonn. In 1993 he became Professor of Organic Chemistry at the University of Karlsruhe.
Since 1999 he has headed the Department of Chemical Biology at the Max Planck Institute of Molecular Physiology and, concurrently, has also held the position of Full Professor of Biochemistry at the Technische Universität Dortmund. Since 2005 he has headed the Chemical Genomics Center of the Max Planck Society. Author of more than 500 peer-reviewed scientific publications, he has been awarded numerous academic distinctions, including the Otto Bayer Prize, the Emil-Fischer Medal of the German Chemical Society (GDCh), the Hans-Herloff-Inhoffen-Medal and the Max Bergmann Medal. In 2014, he received an Honorary Doctorate by Leiden University, NL, for his contributions to the field of Chemical Biology.
He is a member of several Editorial Boards of international journals such as Angewandte Chemie, and ChemBioChem, and he is the European Editor-in-Chief for Bioorganic and Medicinal Chemistry. He also serves on various Advisory Boards including Max Planck Innovation GmbH (Chairman) and Boehringer Ingelheim Foundation and he is member of the Scientific Committee of the Institut Européen de Chimie et Biologie, Bordeaux, France. He is a member of the German Academy of Sciences Leopoldina, and the Academy of Sciences and Literature, Mainz.

In the grand tradition of Natural Products Chemistry started at UZH by Paul Karrer, the research focus of Professor Waldmann is on the synthesis of natural products. He has also developed methods and strategies for the production of whole collections of active substances that are closely related to individual natural products. For this, not only novel techniques in organic synthesis are developed, but also biochemical and cell-based analysis assays are used with state-of-the-art methods of computer science. He has developed novel reactions and reaction cascades for the synthesis of many complex natural products, some of which are a promising starting point for the development of innovative tumour therapies.

He has also studied the synthesis and biological properties of lipidated proteins that play an important role in signaling and transport processes in living cells. The goal is to develop highly practical and reliable methods for the synthesis of such lipoproteins, in particular those that belong to the group of Ras family proteins. Ras is a key component of various signal transduction pathways that regulate growth and differentiation processes – and is thus one of the central starting points for new, hopefully more effective cancer treatments.