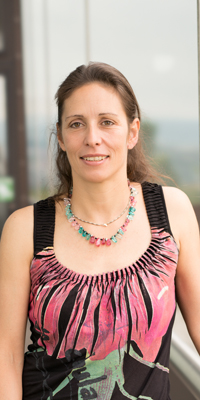 Marcella Iannuzzi has received her Master’s degree in Physics from the University of Milano (I) in 1997. In 2001, she received her Ph.D in Materials Sciences from the same university, under the supervision of Prof. Leo Miglio. In Milano, she studied by means of atomistic simulations the electronic and mechanical properties of silicides, which are common materials for metalization in microelectronics devices. This project was at the interface between advanced simulation techniques and cutting-edge technology, thanks to the close collaboration with industrial partners (STMicroelectronics). Afterwards, she joined the group of Prof. Michele Parrinello as postdoctoral researcher, at the max Planck Institut in Stuttgart (D) first, and later for the ETH Zürich, at the Swiss Center for Scientific Computing (CH). Here, she became part of the developers’ team of CPMD program package. She implemented and applied advanced techniques for electronic structure calculations at the density functional level of theory (DFT) and for the enhanced sampling by molecular dynamics simulations in condensed matter. In this environment, she broadened her knowledge into combining advanced sampling methods and properties evaluation to describe dynamic processes of molecular systems of technological interest. In 2004, she moved to the University of Zürich (CH), as postdoctoral researcher in the group of Prof. Jürg Hutter, to work on the development of methods for large scale DFT calculations, joining the developers’ team of the CP2K program package. In this context, she also contributed with computational tools for the simulation of spectroscopic properties, like core level X-ray spectroscopy and nuclear magnetic resonance. Between 2006 and 2009, she was hired in the group of Core and Fuel Behaviors in the department for Nuclear Energy and Safety, at the Paul Scherrer Institut (CH), to study from the atomistic view point the behavior of nuclear fuel materials under irradiation and in the presence of 2D defects, as grain boundaries. She also contributed as leader of the activities of Work Package “Multiscale modeling exercise on uranium dioxide : transport and thermo-mechanical properties”, as part of the EU-FP7 project F-Bridge. After this experience, she came back to the University of Zürich in the group of Prof. J. Hutter, where in 2012 she became Oberassistant. Here, she is responsible for the research on 2D materials, nanostructures at surfaces, and homogeneous/heterogeneous catalysis.

I teach regularly for in undergraduate courses at the department of Chemistry of the University of Zurich. In the past few years I have been responsible for the lectures on ”Condensed Matter Electronic Structure Theory”, during the winter semester, and for
the lecture on ”Statistical Mechanics and Molecular Simulations” during the spring semester. I have also organised several schools and tutorials on the development and application of software for atomic scale simulations and electronic structure calculations.

I am on the board of the IOP journal Electronic Structure and acts as reviewer for several other journals, as JCP, JPC, JCTC, ACSCat, NatComm.