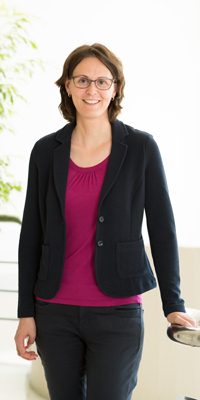 Sandra Luber studied chemistry at the University of Erlangen-Nuremberg, Germany, and ETH Zurich, Switzerland, where she received the Master’s degree (MSc ETH Chemistry) in 2007. She completed her PhD (Dr. sc. ETH Zurich) in (relativistic) quantum chemistry and theoretical spectroscopy under the supervision of Markus Reiher in 2009. After a postdoctoral stay (2010) in the field of bioinformatics with Mihaela Zavolan at Biozentrum of the University of Basel, Switzerland, she joined the group of Victor S. Batista (2010-2011) at Yale University, USA, studying, among others, quantum mechanics/molecular mechanics approaches and nature’s photosystem II. After 10 months in industry (2012) at BASF SE in Ludwigshafen, Germany, she became project group leader with Jürg Hutter at University of Zurich. The habilitation thesis was finished in July 2016 and she became SNSF professor in March 2017. In 2021, she was promoted to associate professor for Computational Chemistry.

Besides various awards at music competitions, research awards include the IBM Research Prize for Computer Modelling and Simulations in Chemistry, Biology, and Materials Science, Forschungskredit, and the ETH medal for an outstanding PhD thesis.

Moreover, she has been the first theoretician to receive the Clara Immerwahr Award, the first female scientist to obtain the Hellmann Award of the Arbeitsgemeinschaft Theoretische Chemie (awarded annually since 1999) and the first woman who has received the Robin Hochstrasser Young Investigator Award. Additionally, she is the recipient of the Werner Prize 2018 of the Swiss Chemical Society, the OpenEye Outstanding Junior Faculty Award 2019, the Jochen Block Prize 2019 of the German Catalysis Society, and the Carl Duisberg Memorial Prize 2019 of the German Chemical Society. For more information, see also Awards section.

A career path doesn’t always have to be straight
Interview with Sandra Luber, AcademiaNet, 27.7.2020