SNF-Professor Madhavi Krishnan has just  been awarded an ERC Consolidator Grant of over 2.1 million Euros.

Madhavi Krishnan aims to develop a new experimental platform to study 3D macromolecular structure and temporal conformation by measuring the electrical charge of a single trapped molecule in real time.

Only recently, Madhavi Krishnan invented the ‘electrostatic fluidic trap’, a “field-free” principle that supports stable, non-destructive confinement of single macromolecules in room temperature fluids, representing a paradigm shift in a nearly century-old field. The spatio-temporal dynamics of a single electrostatically trapped molecule reveals fundamental information on its properties, e.g., size and electrical charge. The charge of a macromolecule is in turn a strong function of its 3D conformation - the molecular basis of biological function. 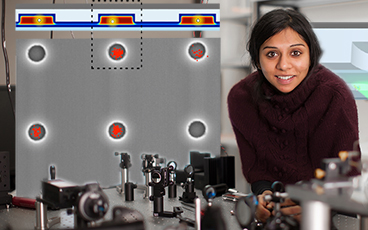 The ability to experimentally link electrical charge and molecular structure will not only open up a new physical dimension in our understanding of macromolecules, but will also advance the development of ultrasensitive, high-throughput molecular sensors for biomedical detection and analytics, potentially enabling an optical or electrical “single-snapshot” read-out of the proteome or transcriptome of a single cell.

Link to the UZH Press Release