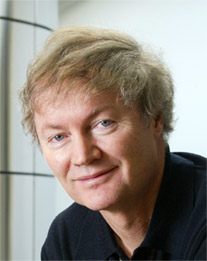 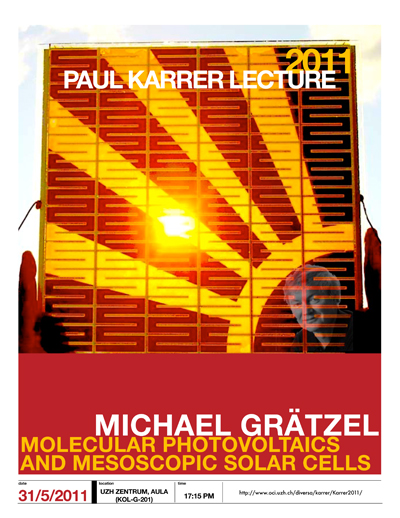 Professor at the Ecole Polytechnique de Lausanne, Michael Graetzel directs the Laboratory of Photonics and Interfaces. He pioneered research on energy and electron transfer reactions in mesoscopic-materials and their application in solar energy conversion systems, optoelectronic devices and lithium ion batteries. He discovered a new type of solar cell based on dye sensitized nanocrystalline semiconductor oxide particles. Author of over 800 peer-reviewed publications, two books and inventor of more than 50 patents, his work has obtained 60'000 citations so far (h-index 114), ranking him amongst the 10 most highly cited chemists worldwide. He has received prestigious awards, including the Balzan Prize, the Galvani Medal, the Faraday Medal, the Harvey Prize, the Gerischer Award, the Dutch Havinga Award and Medal, the International Prize of the Japanese Society of Coordination Chemistry, the ENI-Italgas Energy-Prize and the year 2000 European Grand Prix of Innovation. He was selected by the Scientific American as one of the 50 top researchers in the world. He received a doctor's degree in Natural Science from the Technical University Berlin and honorary doctors degrees from the Universities of Hasselt, Delft, Uppsala and Turin. He has been the Mary Upton Visiting Professor at Cornell University and a Distinguished Visiting Professor at the National University of Singapore. He was an Invited Professor at the University of Berkeley, the Ecole Nationale de Chachan (Paris) and Delft University of Technology. In 2009 he was named Distinguished Honorary Professor by the Chinese Academy of Science (Changchun) and the Huazhong University of Science and Technology. He is a member of the Swiss Chemical Society as well as of the European Academy of Science, a Fellow of the Royal Society of Chemistry and was elected honorary member of the Société Vaudoise des Sciences Naturelles.


On 9 June 2010, Grätzel received the Millennium Technology Prize, for development of dye-sensitized solar cells. The prize was awarded, in Helsinki, Finland, by the President of Finland, Tarja Halonen, and states "For his invention and development of dye-sensitized solar cells, known as "Grätzel cells". The excellent price/performance ratio of these novel devices gives them major potential as significant contributor to the diverse portfolio of future energy technologies. Grätzel cells are likely to have an important role in low-cost, large-scale solutions for renewable energy. Besides photovoltaics, the concepts of Grätzel cells can also be applied in batteries and hydrogen production, all important components of future energy needs."