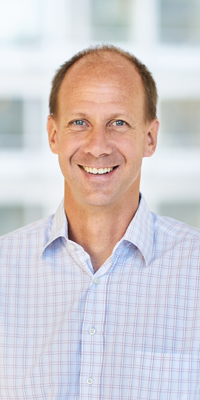 Since 2017, Roland K. O. Sigel is the Dean of the Faculty of Science. For all issues related to the Dean's office, please contact Elvira Koller

Roland K. O. Sigel was born 26.11.1971 in Basel, Switzerland. He grew up in a small village near Basel, where he also visited elementary and completed high school in 1990. From 1991 to 1995, he studied Chemistry at the University of Basel with Biology and Biochemistry as a minor subject, and a Diploma Thesis in Organic Chemistry.

Roland currently is Full Professor (2016) of Bioinorganic Chemistry as well as the Dean (2017) of the Faculty of Science at the University of Zürich, Switzerland. From 2009 to 2016 he was Associate Professor and from 2003 to 2008 Assistant Professor at the same University. His assistant professorship was endowed with a Förderungsprofessur of the Swiss National Science Foundation. After his studies of Chemistry at the University of Basel, Switzerland, he worked with Bernhard Lippert (University of Dortmund, Germany) on the effect of Pt(II) coordination on the acid-base and hydrogen-bonding properties of nucleobases and received his doctoral degree summa cum laude (1999). Thereafter he spent three years at Columbia University, New York, with Anna Marie Pyle (now Yale University) studying ribozymes. During the six years abroad he received several fellowships, including a European TMR Fellowship and one from the Swiss Academy of Natural Sciences. He was awarded the EuroBIC Medal in 2008, the Alfred Werner Prize (Swiss Chemical Society) in 2009 as well as an ERC Starting Grant by the European Research Council in 2010.

His scientific interests center around the manifold aspects of metal ion binding to large nucleic acids. Presently, most of the research in his lab is focused on the structural and catalytic role of metal ions in nucleic acids, especially group II intron ribozymes. Riboswitches, which are gene regulatory elements occurring mostly in bacteria, as well as specific structural motives like three-way junctions and quadruplex structures, are a further focus of his research. His group applies a broad combination of tools, including (bio)chemical syntheses, single molecule fluorescence (smFRET), and NMR spectroscopy.

Roland has published more than 110 peer-reviewed publications, has given more than 115 lectures at international conferences and Universities, was an editor of Volumes 43 and 44 of the Metal Ions in Biological Systems series and is now co-editing the new series Metal Ions in Life Sciences. He is married to Prof. Dr. Eva Freisinger and they have a son (*2007) and a daughter (*2011).