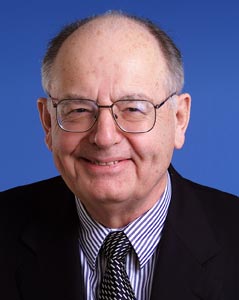 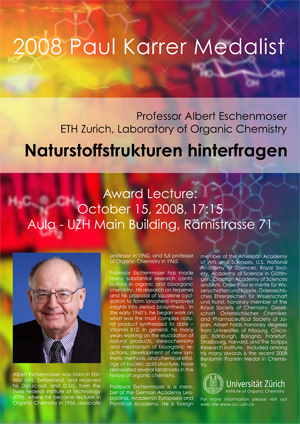 Albert Eschenmoser has been Professor Emeritus at ETH Zurich since 1992.
He was born in Erstfeld (Uri), Switzerland, on August 5, 1925 and received his Dipl.sc.nat. in 1949 and his D.Sci. in 1951 from the Swiss Federal Institute of Technology (ETH), where he became private lecturer in Organic Chemistry in 1956, associate professor in 1960, and full professor for General Organic Chemistry in 1965.
In his research in organic and bioorganic chemistry, Eschenmoser has made contributions to theory of terpene biosynthesis, structure elucidation of natural products, stereochemistry and mechanism of organochemical and biochemical reactions, development of new methods for organic synthesis, total synthesis of complex natural products and chemical etiology of nucleic acid structure.
Eschenmoser is a member of the German Academy Leopoldina (Halle), Academia Europaea (UK) and the Pontifical Academy (Vatican), a foreign member of the American Academy of Arts and Sciences (Boston), the National Academy of Sciences (Washington), the Royal Society (UK), the Academy of Science in Göttingen, the Croatian Academy of Sciences and Arts (Zagreb), the orden Pour le mérite für Wissenschaften und Künste (Berlin), and the Österreichisches Ehrenzeichen für Wissenschaft und Kunst (Wien), he is a honorary member of the Royal Society of Chemistry (London), Gesellschaft Österreichischer Chemiker (Wien), and the Pharmaceutical Society of Japan. He holds honorary degrees from the Universities of Fribourg, Chicago, Edinburgh, Bologna, Frankfurt, Strasbourg, Harvard, and from The Scripps Research Institute.