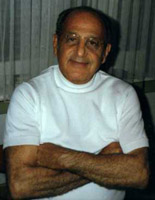 André S. Dreiding, born in Zurich, Switzerland on June 22, 1919, attended the Gymnasium (Matura) in Zurich and the Columbia University (BS, MS) in New York. After a 2-year period as research assistant at Hoffmann-La Roche, he continued graduate research at the University of Michigan in Ann Arbor with Prof. W. Bachmann (PhD 1947) and subsequently stayed there as Rackham and Lloyd Postdoctoral Fellow until 1949. From 1949 to 1954 he was Assistant Professor at Wayne University, Detroit Institute of Cancer Research. After Prof. Bachmann's death in 1950 Dreiding also took over teaching and research duties at the University of Michigan until 1952.

In 1954 he returned to Switzerland and joined the University of Zurich, where he stayed as Professor until 1987 and since then as Emeritus Professor. Dreiding received the Werner Medal and the Ružička Prize of the Swiss Chemical Society and was awarded honorary degrees by the University of Clermont Ferrand and by the ETH, Zürich. He was elected President of the Swiss Committee of Chemistry (top organization of all Swiss chemical societies), initiated (1965) the Bürgenstock Conferences on Stereochemistry, invented (1958) the Dreiding Stereomodels, served on the editorial board of several chemical journals, including 'Helv. Chim. Acta', 'Chemie in Unserer Zeit' and 'MATCH' (Mathematical and Computer Chemistry). Dreiding lectured at numerous conferences and acted as visiting professor in several universities all over the world.

Research Interests:
The major research activities of Dreiding were concerned with several fields of

They included 1 Stereochemistry:
a. cis- and trans-ring fusions in alicyclic compounds as in steroids (Pd-isomerizations and conformational analysis),
b. systematic analysis of several types of molecular models, including Stereomodels and Inversomodels,
c. regio- and stereo-selectivities of pericyclic reactions (H-migrations, cyclizations, cycloadditions, rearrangements) including ketene additions,
d. configurational retention via lithiation,
e. N-atominversion in polyaza-compounds and 3-point configurational variation in azimines,
f. uncovering of the enantiomeric excess effect (EE-Principle),
g. fundamental concepts of chirality.

2 Stucture elucidation of natural products:
a. betacyanins and betaxanthins, the red and yellow nitrogenous pigments of certain plants (centrospermae, a.o. the red beet and cactus flowers and fruits),
b. vertinoids and their colored dimers from moulds.

6 Use of highly reactive intermediates such as ketenes, carbenes, nitrenes, cyclopropenones, cyclobutenones (additions to olefins and azocompounds) leading to otherwise difficultly accessible products.

B) Mathematical Chemistry (originally motivated by generalizations of stereochemical principles including chirality):